Izadora L'Amara is a character in Motherland: Fort Salem. She is portrayed by Emilie Leclerc.

Izadora is a Necro lab scientist who is in charge of the Necros at Fort Salem and in charge of monitoring the dead. She analyzes the dead after The Spree attack to determine who and what they were after.

Witch Physiology: As a witch, Izadora is capable of affecting change by generating different sound frequencies with her voice. She is a powerful witch who teaches in Necros at Fort Salem and scrys during military operations.

"Grief is stubborn and wild, like an untamed animal. Sometimes you have to let it run all over the place until it wears itself out." 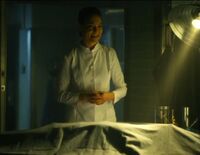