General Petra Bellweather has served in the U.S. army for most of her life, just like her ancestors before her. She is mother to cadet Abigail Bellweather.

Petra is the guiding and pushing force behind Abigail Bellweather. She has served for long time in the U.S. army as a General, and she wants her daughter to follow in her footsteps. At times, Petra can be very pushy and expects nothing but the best from Abigail. However, it is clear from her actions that she cares deeply for her.

Petra was always a dutiful general who supported and helped General Alder, however she started to have doubts about Alder's decisions as The Spree started to gain momentum. Upon learning from Raelle Collar that Alder had a Spree infiltrator at Fort Salem, she approached the President. The President decided to relieve Alder of her longtime duty as leader of the army and informed Petra that she planned to make her the new head of the army. However, during the President's televised speech, Alder puppeteered the President and granted Alder unlimited power instead of declaring Petra as the new leader.[1]

Because of this attempt, Alder blocked her daughter's placement at War College and deployed her unit. Managing to pull some strings, Petra secured a solo placement at the college for Abigail, but when the latter learned that this did not include her unit, Abigail went ahead and joined them on the Tarim rescue mission with Alder.[2]

Petra is tall with dark brown hair. She is always dressed very elegantly and walks with a lot of confidence.

Witch Physiology: As a witch, Petra is capable of affecting change by generating different sound frequencies with her voice. As a Bellweather, she is a very powerful witch.

Willa Collar was one of the bravest soldiers I knew. She was the fixer every unit wanted to deploy with. Your mother's unconventional methods delivered incredible results. Countless lives were saved because of her work. And from what I understand, you have followed in her footsteps by trying to save a young man's life. I wish she could have been here with us today. She would've been so proud of you.

Petra to Raelle in Bellweather Season 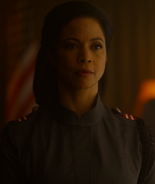