The Spree, The Camarilla, Petra Bellweather

Say the Words
General Sarah Alder is a main character in Motherland: Fort Salem. She is portrayed by Lyne Renee

She is the highest-ranking officer in the Armed Forces and the only leader the witches have known.

Growing up, Alder's family was hunted by witch hating groups such as the church and the Camarilla. Most of her friends and family were killed during the persecution of witches by the Camarilla. The Camarilla greatly desired Sarah's vocal cords, but she got away when she and her sister fled Europe to escape the Camarilla and the Burning Times.

After coming to the New World and Salem Town, she was discovered as a witch and sentenced to death by hanging in the Salem Witch Trials. After witnessing the death of her sister, the trauma resulted in Sarah using her last moments to release an ancient song that made a powerful storm going against centuries of tradition. This song was meant to never be uttered. The release of the vocalizations created weatherwork and Sarah ceased to be fertile. Villagers, seeing the impact of the song recognized the potential uses for her gifts.

Alder signed the Salem Accord first with the Massachusetts Bay Militia and later it was drafted into the Constitution of the United States. This document spared witches from persecution but conscripted them and future generations as a military force. This agreement is binding in both legal and supernatural ways.

On the eve of the Revolutionary War, Alder and her generals orchestrated a surprise attack on British and Hessian forces. Alder used her weatherwork to end the Revolutionary War in a single afternoon. Afterwards, she began looking for new witches to join the military. She discovered many powerful witches among enslaved African Americans, and they soon comprised the majority of her early ranks.

In the early days of the military, Alder had a witch in her ranks (possibly Raelle's Collar's ancestor) who lacked talent. The soldier saved Alder's life a dozen times and Alder remembers her as the bravest soldier she's ever known.

At some point, Alder was dying and in exchange for what is now called the Chippewa Cession, the Native Americans gave her a power that allowed her to spread her age around a group of people called "Biddies." The position of a biddy is considered honorable and a sacrifice that is exalted among the witches. They accompany Alder everywhere.

Sarah was able to eventually hunt down the remaining Camarilla and seemingly destroyed them.

In 1813, after her victory in the Second Mexican War, Alder posed for a portrait in Marblehead, near Fort Salem. The portrait hangs in Memorial Hall.

During the Battle of Eupatoria in 1853, Alder and the biddies led American allies in a victory against the Ottoman Empire.

In 1861, during the Battle of Allace, General Alder and her Scourge-wielding biddies were ambushed by Prussian forces.

In 1909, a year into the World War, Alder and two biddies surveyed allied troops in Rhineland. Later that year, Alder contributed to the assault on the Eastern Front and turned the tide of the war.

Alder helped raise Anacostia Quartermaine when she was a fosterling at Fort Salem.

In the present day, Alder is the head of the Army at Fort Salem.

Throughout the Series[edit | edit source]

Alder welcomes the girls to Fort Salem and warns them about what lies ahead. She meets with President Wade and her war council to decide what to do about The Spree. She plans an attack against them, but unfortunately, it is not successful, and the Spree kill the witch soldiers. Alder grows frustrated with the minimal improvements.

On the eve of Beltane, Alder welcomes to the male recruits arriving for the honored tradition.

When meeting with the Hague, an international tribunal where the standards of war are established and discussed, General Alder becomes aware of the Tarim, a sect of witches that come from a very contested part of the world. The Tarim does not want any part in the fighting or militarization. Alder recognizes their songs as being from her family. While discussing them, one of Alder's biddy's begin to die, causing Alder to age. Alder tells the biddy as she lays dying that her sacrifice won't be forgotten. Anacostia brings in the new biddy recruit - Devon and Alder absorbs her youth.

Before Beltane, Petra Bellweather asks Alder to consider the possibility that there was a breach from the Spree inside Fort Salem and that maybe Porter didn't want to commit suicide after all, but was instead forced to. She suggests cancelling Beltane altogether to protect the witches, but Alder says she will stand by the long-time honored tradition of Beltane and that Anacostia will enforce security during the event in case. Later, Petra attempts to discuss the Tarim cell with Alder, but Alder dismisses it.

At Beltane, Alder connects and has sex with Witchfather. When the male witches prepare to leave, Alder tells Witchfather that celebrating Beltane matters despite the Spree's opportunity to attack. Witchfather tells Sarah that the lack of Spree attacks is temporary.

Alder meets with Adil - a member of the Tarim who has brought his sister Khalida to Fort Salem to treat a mysterious illness. She tells Adil to relax and enjoy Fort Salem while her healers attend to Khalida. Later, Adil comes in to talk to her. She says that his people's songs remind her of her own family's songs and she would like to learn them. He retorts that she took her songs and turned them into weapons. He prefers to keep his songs with his people as the Tarim will remain the final stewards of their songs.

General Alder interrogates Scylla Ramshorn after she is discovered as a Spree spy. Alder questions her about the Spree, but Scylla mocks Alder for serving the same people who tried to kill her. Alder tortures Scylla with illusions and induced pain. Anacostia attempt to enter Scylla's mind, but it does not work.

General Alder greets Witchfather and the male witches when they return to Fort Salem to build weapabout his fear that the humans will revoke the Salem Accord and disband the army because of the growing unrest of humans in regard to witches, mostly in response to the Spree attacks.

Under Alder's watch, the nurses again try to cure Khalida, but a groan that comes out of her mouth disrupts the environment and the biddies protect Alder. Later, Khalida has been cured and it has been called a "miracle", but Alder is doubtful.

Anacostia reports back to Alder about the Spree's headquarters so that they can track it down. Anacostia admitted that she recognized a trace of regret in Scylla's mind. Alder is dismissive and simply says that Anacostia has a soft spot for orphans.

Alder approaches Khalida and tells her that she will do everything in her power to protect her and her people. Khalida offers something in return to thank her. Alder tells her she wants to learn her and the Tarim's songs to make the world a better place. Khalida complies and sings for Alder, but it's a trick. All the plants in the greenhouse die around them. Alder collapses to the floor. Khalida then says "Our songs are not safe with you."

Alder commands a unit to attack the headquarters, but they burn to the ground and Alder asks the cadets to intercept the Spree heading towards Boston. There, the cadets win the confrontation but have to kill civilian hostages in the process, on Alder's orders.

Alder openly lies to the public on television about what really went down on the attack, where one cadet died, to protect the image of the army. She starts to lose the trust of her confidantes, including Anacostia Quartermaine.

Alder, Petra, and Izadora discuss the Tarim attack and consider the possibility that the attack was not from the Spree. The Camarilla, is suggested by Izadora but Alder says she removed them years ago and that they are not a threat.

Alder reports to Adil and Khalida about the Tarim attack and tells them her plan to intervene to save more of the Tarim. Khalida says that won't be necessary because once the songs of her people are in the hands of governments, the world won't be worth fighting over. Alder tells Khalida to watch it because she's alive because of her.

President Wade gains information about Alder's recent cover-ups and decided to relieve Alder of her duties, preparing to appoint Petra Bellweather as the new general. Alder retaliated by puppeting President Wade during the announcement, making the elected official announce increased power and discretion for Alder rather than the change.

Alder blocks Abigail, Raelle, and Tally's War College acceptance after their basic training graduation because she has different plans for them - a rescue mission to save the Tarim. The group deploys together but the girls accuse Alder of many wrongdoings and demand answers. Alder says she doesn't owe them any answers but for the sake of trust she will explain herself. She explains how she has had to make many hard decisions over the years and that every decision hurts, but it is for the better good of their people.

After curing and rescuing the Tarim, the witches are confronted by the Camarilla who burn the pilots alive on stakes and tell Alder that they saved a place for her. Alder kills two Camarilla quickly and later brings down a lightning storm on them. Two of the biddies are hurt in the battle which causes Alder to weaken. Tally offers to be one of her biddies to give her the strength she needs, Alder accepts and gets her strength back. She slices an incoming Camarilla in half and thanks Tally.

The group runs to escape via helicopter. Raelle gets hurt and Abigail tries to save her. Alder must make the decision to leave them behind for the greater good of their group.

Despite appearing middle-aged she is well over 300.

Witch Physiology: As a witch, Alder is capable of affecting change by generating different sound frequencies with her voice. Sarah is an extremely powerful witch and can use the biddies to increase her power.

Welcome to Fort Salem. It is a solemn day, much like the day some 327 years ago when I made a deal with the Massachusetts Bay Militia. My terms were simple. Honor me, make a place for me and my kind and we will win your wars. That was before we were even America. All of you have answered the call, just like your mothers and their mothers before them. You are the daughters of ancient lines. You are called to greatness. You have bravely pledged to serve and defend this great country. I assure you, dark days await us. We live in a time of ancient hatred and emerging threats. We will need all of you to meet what's coming, and we will meet it. With storm and fury. You are among your own kind. Take comfort in it. Find strength in it. A blessing on all of you, a blessing on this place - this witches' place.

That soldier I was telling you about saved my life a dozen times. While lacking certain hereditary advantages that you and I are both blessed with, while having the audacity to be born to an undistinguished line of combat medics, that 'shitbird' happens to be the finest soldier that I've known. Selfless. Brave. Loyal beyond measure.

This is on you, private. You bring that girl around until she's right.

I never needed the Hague's approval for my actions. I simply extended the invitation to accept my rulings.

Add a photo to this gallery

Add a photo to this gallery 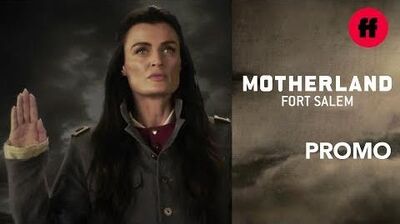 Retrieved from "https://motherland.fandom.com/wiki/Sarah_Alder?oldid=2832"
Community content is available under CC-BY-SA unless otherwise noted.